Introduction: Due to the advantages of robotics over conventional laparoscopy, Robotic living donor nephrectomy  (RLND) is increasingly being adopted for kidney harvest. This study was undertaken to determine the effects of temporal trends in donor demographics on perioperative outcomes in RLDN.

Methods: All living donors who underwent RLDN from March 2000 to March 2013 at the University of Illinois, Chicago, were included in this single-center retrospective study. The patient demographic and clinical characteristics were recorded. The focus of the study was perioperative surgical outcomes in terms of operative time (ORT), warm ischemia time (WIT), estimated blood loss (EBL), length of stay (LOS), complications, and readmission rate. The consecutive LDs (Living donors) were divided chronologically into four different groups corresponding to the four different epochs in time to assess the refinements in the surgical technique on the outcomes of RLDN. The clinical and surgical outcome variables were compared temporally statistically examined, and inferences were drawn. All analysis was carried out using SAS 9.3 (SAS Institute, Cary, North Carolina, USA).

Results: A total of 800 consecutive donors underwent robotic-assisted donor nephrectomy. The mean donor age was 36±11.0 years, and there were more females than males. The BMI varied from 17-53kg/m2 with a mean BMI of 29.2± 5.7 Kg/m2, and 62.6% of donors were first-, degree relatives of the recipients. The proportion of left kidneys procured was 95.7%. Arterial anomalies were present in 26.1% of donors, while 2, 3, and 4 arteries were present in 22.4%, 2.3%, and 0.2%, respectively. Venous anomalies were present in 16 patients overall. Most procedures (98.8%) were conducted with robotic assistance. Five cases (0.6%) were converted to an open, while another 4 patients had another concurrent procedure during the robotic nephrectomy, as shown in table 1. From the year 2000-to 2013, a gradual increase in donor age was observed (p=0.01) (Table 2). There were no changes in the male to female ratio and the mean BMI temporally. Donations across all races increased significantly (p=0.03) except Hispanics. Statistically significant increases were noted in ORT (p<0.0001), WIT (p<0.0001), EBL (p<0.0001), and LOS (p<0.00101) between the last and previous eras, as the new surgeons and fellows took over as console surgeons. Although the complication rates significantly decreased from 2000-2013 (p<0.0001), there has been a steady increase in readmission rate over time (p<0.0001), as shown in the table below (Table 2). 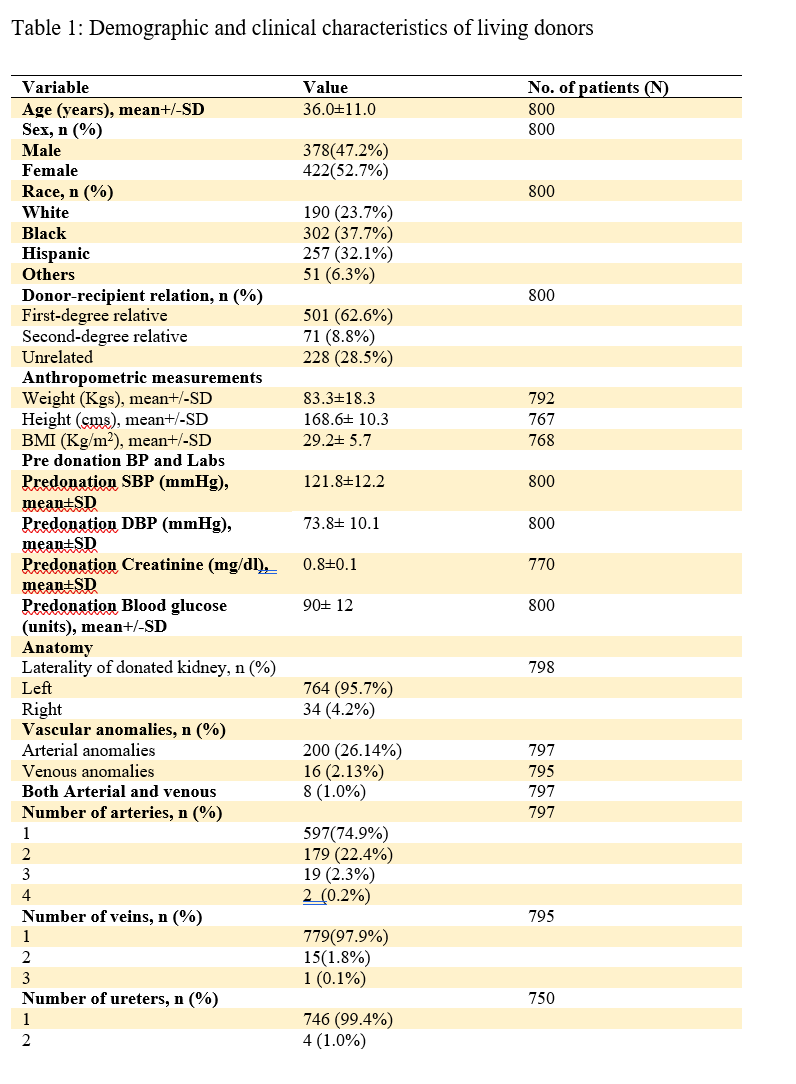 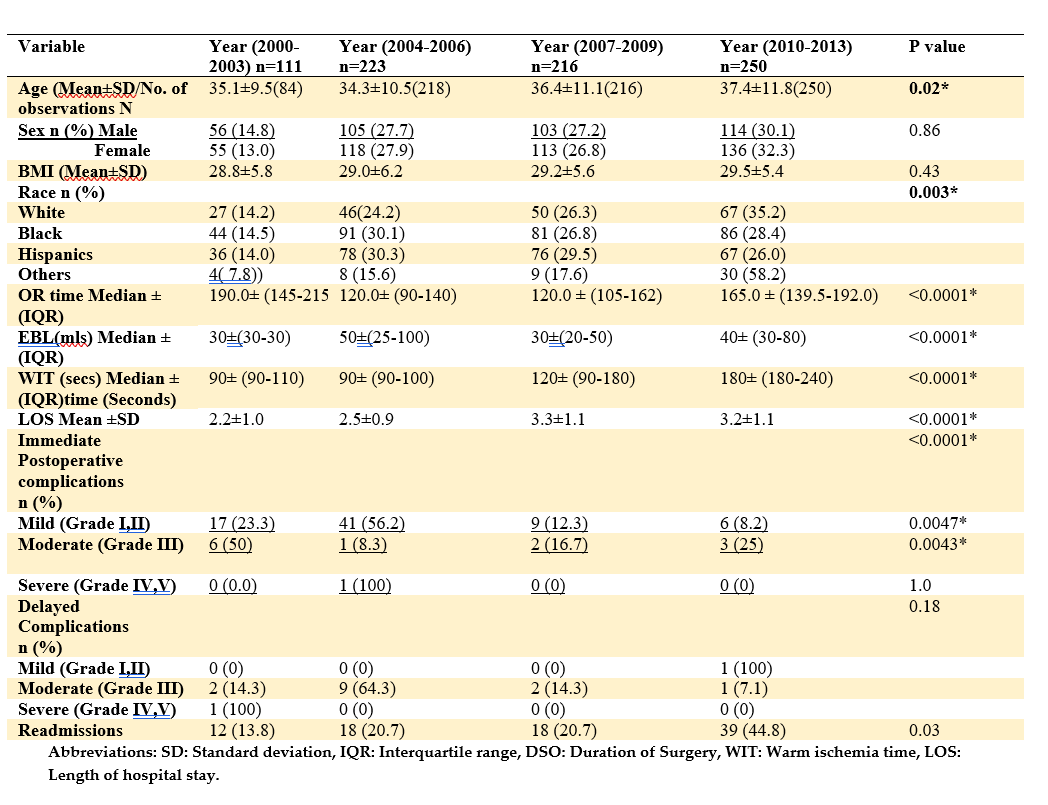 Conclusions: The results from this study reveal that RLDN is a safe technique that can be used for safe kidney harvest across a different subset of patients with a wide range of BMI. In addition, the method is safe despite new surgeons and fellows being introduced as console surgeons.

Presentations by Arshad B Khan