Introduction and objectives: Delayed Graft Functions (DGF) has a relevant impact in Kidney Transplantation (KTx) being associated with suboptimal outcomes and increased healthcare costs. The necessary and increased use of Extended Criteria Donors (ECD) is inevitably linked with more DGF. Cold Ischemia Time (CIT) remains a crucial determinant of DGF. In the UK specific standards of CIT have been established for KTx from Donors after Brain Death (DBD), <18 hours and Donors after Circulatory Death (DCD) <12 hours. In this study we evaluate the incidence and impact of Beyond Standard (BS) CIT in ECD and estimate the cost of DGF in this group of recipients of KTx.

Material and methods: We retrospectively reviewed our database with 218 consecutive KTx and analyzed type of donors, donor characteristics, incidence of DGF and Primary Non Functions (PNF). We also analyzed the CIT and its component defined as Extraction Time (ET) Transport Time (TT) and time from Delivery of the Kidney to Perfusion with Blood called Unit Time (UT). The cost estimate of the impact of DGF was based on the tariff for KTx currently paid by Healthcare Commissioners (HC) in the UK equivalent to £17,000. The cost estimate of DGF was based on available published evidence identifying an increased 10% for hospitalization and further 10% for dialysis sessions >1.

Conclusion: Our series shows that a substantial proportion of KTx have been performed with a BS CIT which certainly influences the incidence of DGF and PNF in KTx especially from ECD and consequently increases the estimate cost. Adequate infrastructure and readiness of all transplant facilities in order to reduce CIT are mandatory for accepting ECD. 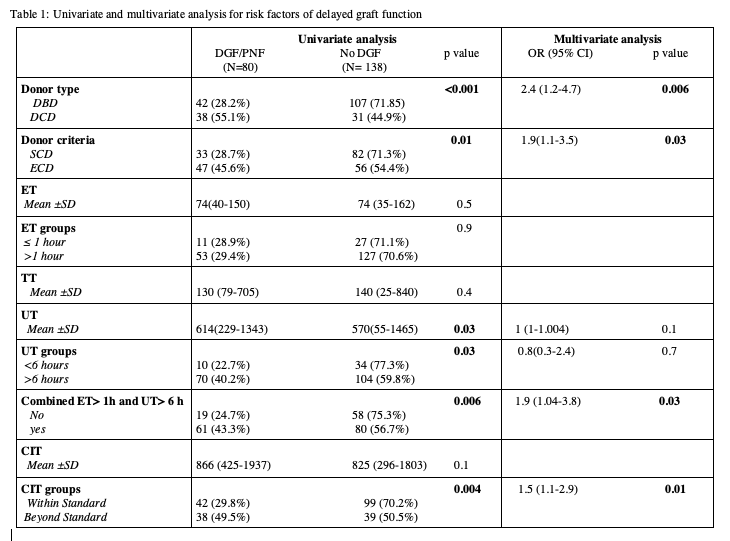