Objectives: To determine the characteristics of renal transplant patients with hyperkalemia. Evaluate the use of Renin Angiotensin Aldosterone System inhibitors (RAASi) in this population.

Materials and Methods: Laboratory records of kidney transplant patients in our unit between January and December 2021 were evaluated. Clinical variables (age, time since transplant, sex, use of RAASi) and laboratory variables (kalemia, creatininemia, proteinuria) were analyzed. ). Renal function was calculated using the CKD EPI formula. Only records of patients in stable conditions were considered, discarding those records during hospitalizations or clinical complications. Two groups were divided with and without records of hyperkalemia (greater than or equal to 5 mEq/l) and statistical differences between groups. A value of p <0.01 was considered significant.

Results: In the evaluated period, out of 454 patients under follow-up, 438 had a record of potassium values obtained in the database, to which a total of 1349 determinations were made. Of these determinations, 138 had high values (10.23%), which corresponded to 74 patients (16.3% of the study population). Of these 74 patients, 29 (39%) had more than one elevated record. Results are resented in Figure 1. 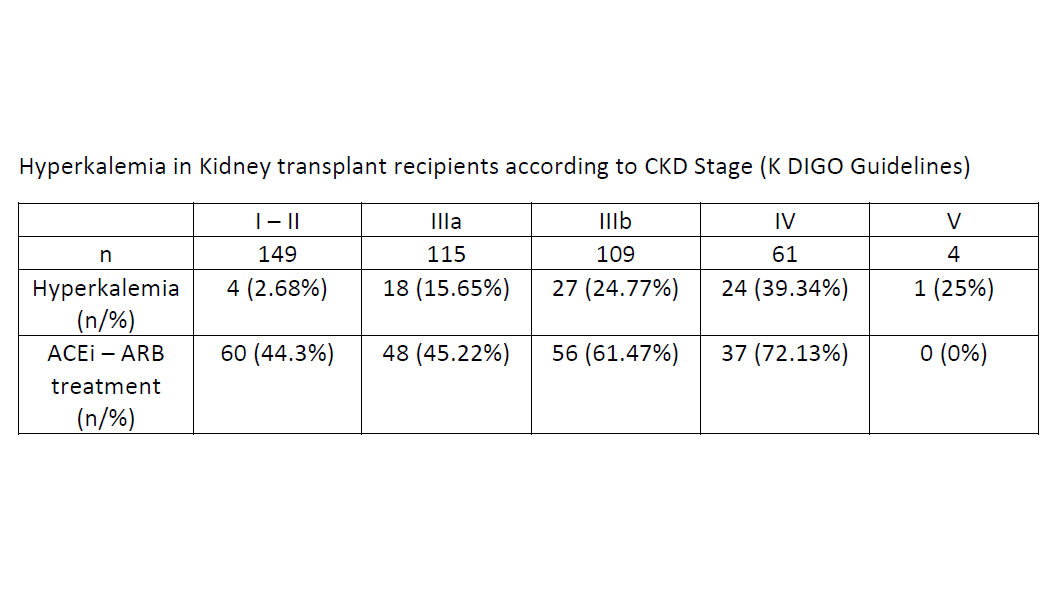 Patients with hyperkalemia presented higher creatinine values, lower glomerular filtration rate and lower red series values. The group with hyperkalemia had a significantly greater use of RAASi, mainly due to the use of Angiotensin Converting Enzyme Inhibitors (ACEi). No differences were observed between both groups regarding the use of low doses of ACEi/ARB (Angiotensin Receptor blockers). The results are shown in Figure 1. The frequency of hyperkalemia was significantly higher in the group with renal stage IV (39.34%) vs stage I-II (2.68%) of chronic kidney disease. In stages I-II of CKD, 40% of patients (60/149) are found with RAASi, while in stage IV it rises to 60% (37/61; p 0.007). About 29% of patients with RAASi in both groups were on low doses of the same.

Conclusions: 16% of transplant patients presented hyperkalemia in our series, with a significant difference between those with early stages of kidney disease (2.68% in stages I and II) vs those with CKD IV (39%). Although half of the patients are nephroprotected by RAASi, 29% of them have a dose lower than the average dose.