Introduction: Secondary hyperparathyroidism (HPT) is a frequent complication of end-stage chronic kidney disease (CKD). HPT normally remits around the first year after a successful kidney transplant (KT), correcting most of the metabolic abnormalities; however, it persists in 15 to 50%, called Persistent Hyperparathyroidism (pHPT), increasing the risk of loss of bone mass and fractures. Several factors may be associated with development of HPTp, but so far, they are not well defined. In addition, there is no consensus to define the levels of iPTH to establish pHPT. The KDIGO guidelines recommend starting treatment when the iPTH is >100 pg/ml.

Objectives: To evaluate the prevalence of pHPT in the first year after KT and to correlate it with calcaemia (Ca), phosphatemia (P), alkaline phosphatase (AP) and renal function. Evaluate risk factors for the development of pHPT.

Materials and methods: An observational, longitudinal and retrospective study was carried out in patients who received KT from the Nephrology Service of Córdoba´s Hospital between 2010 and 2019. The data were obtained from the medical records of Nephrology Service. Most received induction with basiliximab and an immunosuppressive regimen with calcineurin inhibitors, mycophenolate, and steroids. The variables analyzed were: age of the organ recipient, sex, type of donor, etiology of CKD, the modality and the time on dialysis. The levels of iPTH, Ca, P and AP were recorded at the time of KT, at 6 and 12 months. Renal function was evaluated at 1, 6 and 12 months. Descriptive statistics were used for the analysis. The comparison between the groups was made using the Chi-square test and the t-test, considering p-value <0.05 significant.

Conclusion: The most important risk factors for the development of pHPT post-KT were patient's age, time on dialysis, AP and iPTH levels at 6 months post-KT. Resolution of HPT occurred in 80% after one-year post KT. Future strategies should be focus on shortening time in waiting list and the timely treatment of tertiary HPT prior to transplantation. 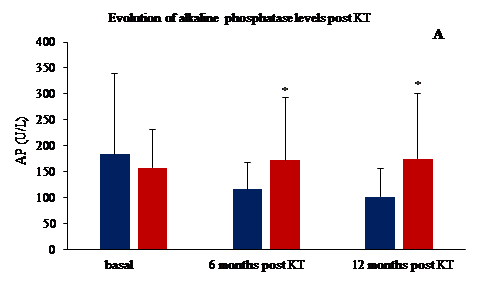 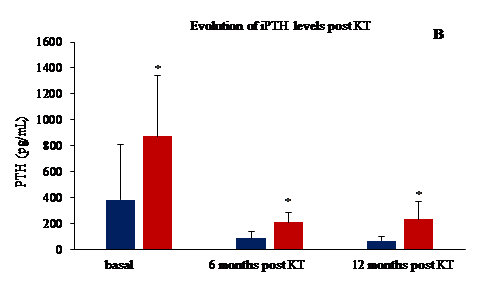