Regulatory T cell populations may be associated with transplant outcomes

Objectives: The development of immunosuppressants has enabled remarkable progress in kidney transplantation (KT). However, current immunosuppressantscannot achieve induction of immune tolerance and their nonspecific immunosuppressive effects result in many adverse effects. Regulatory T cells (Tregs) playcrucial roles in controlling allospecific immune responses. This study evaluated the distribution of Tregs and their effects on kidney allograft function in KoreanKT recipients.

Methods: We enrolled 113 KT recipients with stable graft function between 1995 and 2018. Differentiation and expansion of Tregs were studied by flowcytometry to compare the Tregs subpopulations. Tregs were defined as CD4+CD25highCD127low/-FoxP3+cells.

Results: Among the 113 patients, 73 patients (64.6%) were males and mean follow-up period was 147.5 ± 111.3 months. All patients received calcineurininhibitors as maintenance immunosuppressants. Patients with follow-up period more than 144.3 months tended to have more gating Tregs numbers than that inshorter follow-up period (92.3 ± 142.4 vs. 50.1 ± 76.4, p= 0.061, respectively). There were no significant differences in Tregs subpopulations between patientswith serum creatinine more than 1.5 md/dL and patients with serum creatinine less than 1.5 mg/dL. In terms of the number of Tregs, when the trough level oftacrolimus was at an appropriate level, the number of Tregs tended to be higher than that of Tregs when the trough level of tacrolimus was low or high, and theorgan function of the transplant was also stable. 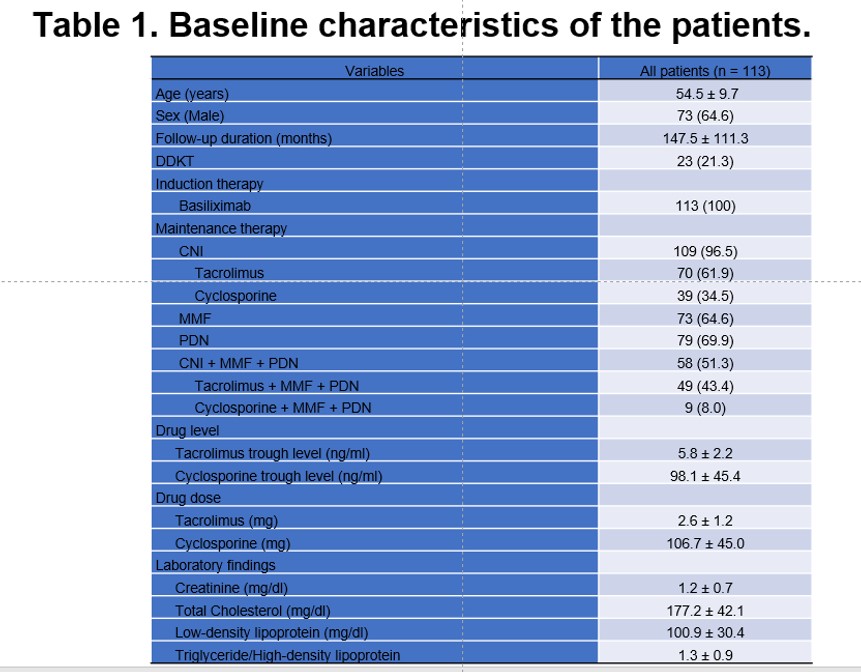 Conclusions: Tregs counts may be associated with transplant outcomes considering that there is a relationship between these cells and kidney graft function.