P8.044 Factors contributing to acute rejection within one year of kidney transplantation with a perspective of Tacrolimus trough level; a nationwide cohort study

Factors contributing to acute rejection within one year of kidney transplantation with a perspective of tacrolimus trough level; a nationwide cohort study

Introduction: Rejection after kidney transplantation (KT) is an important cause of poor long-term survival of the graft. Tacrolimus (TAC) is one of the most critical maintenances of immunosuppressants in KT, and maintaining the proper blood concentration is essential to prevent acute rejection and toxicity of immunosuppressants. We analyzed the risk factors for acute rejection within one year of KT with a perspective of TAC trough level in a nationwide cohort study.

Method: Data of 4,153 KTs using the database of Korea Organ Transplantation Registry (KOTRY) were retrospectively analyzed between April 2014 and December 2020. Clinical information, including TAC trough level and graft function, was reviewed in donors and recipients. Risk factors were analyzed for biopsy-proven acute rejection (BPAR) with a t-test and chi-square. In subgroup analysis, the risk of BPAR was analyzed again by dividing the TAC trough level at discharge into the higher and lower group.

Result: There was no statistical difference in characteristics of donors and recipients between the BPAR group and no BPAR, including the immunologic factors, such as HLA mismatching, pre‐existing donor‐specific antibodies. In subgroup analysis between lower TAC trough level (<5ng/mL) and higher TAC (≥9ng/mL) at discharge, there was somewhat increased BPAR in lower TAC without statistical significance (10.7% vs. 8.9%, P=0.137). Renal functions after KT were better in the no BPAR group with statistical significance (p<0.001). 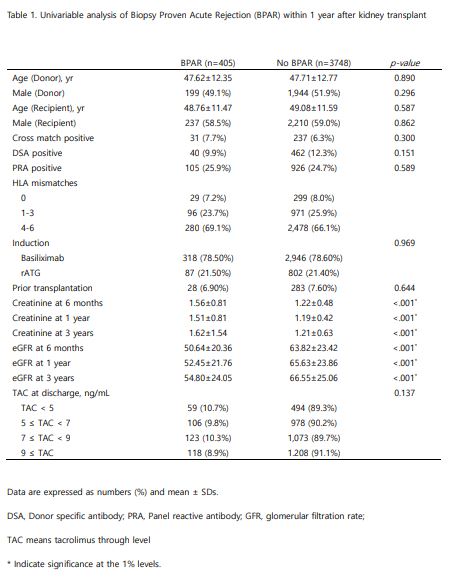 Conclusion: Lower tacrolimus trough level at discharge tends to be associated with a risk of acute rejection within one year of KT. Extensive data and well-designed studies are needed to further investigate tacrolimus level as a risk factor for acute rejection.