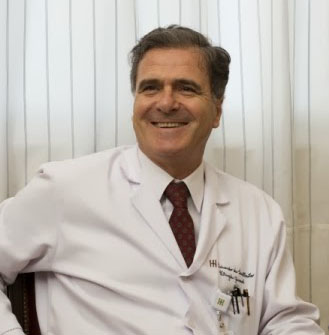 Biographical sketch
Born on June 2nd, 1951
Graduated from the University of La Plata (UNLP) in 1974 being his overall grade average 9.27.
Obtained his Doctor’s Degree in Medicine (MD) from the University of Buenos Aires (UBA) in 1987.
Full Professor of Surgery at University of Buenos Aires (UBA, 2005-2021) and Full Professor and Head of, the Surgery Department (University School of Medicine, Hospital Italiano, 2008-2014).
He has been Chief of the General Surgery Service 2005-2016. The General Surgery Service is the most active of Latin America, having performed over 7,400 procedures since 2012. He is an active former of Residents and Fellows, training surgeons from Agentina and from other countries.
He has been Chief of the Liver Transplant Unit of the Hospital Italiano since 1985,to 2022 where over 1450 liver transplants have been performed so far.
In 1988 together with his team he performed the first liver transplant in an adult and two months later the first liver transplant in a one-year-old child. In 1991 performed the first liver transplant with a living related donor in a one-year-old girl.
He is an active Clinical Researcher and has published more than 270 articles in several national and international journals, more than 52 book chapters and more than 150 Investigation Abstracts.
In 2010 he was Chairman of the World Congress of the Hepato Pancreato Biliary Association; he was Chairman of the Argentine Academy of Surgery, Argentine Asociation of Surgery, Argentine Liver Transplant Society and the Argentine Chapter of the International Hepato Pancreato Biliary Association.
He is Honorary Member of the American Surgical Association, German Surgical Society, European Surgical Association, the Royal College of Surgeons of Edinburgh, the Peruvian Society of Surgery, the Brazilian Digestive Surgery Society and the Ecuadorian Society of Surgery.
He received numerous Awards and Honors.
This year he was acknowledged as the “Best Surgeon” of the last decade receiving the “KONEX”, one of the most important awards given in Argentina. In 2013, he was also honored with the “KONEX PLATINO”
for “Maximum Discipline in Surgery”.

Societies and Committee Member (More than 20):

Aires,Argentina, receiving the gold medal, the highest recognition awarded by

the University for Outstanding Performance, being his overall grade average

9.27. He completed his surgical residency at the Hospital Italiano de Buenos

Aires and later became chief of residents there.

He completed a research fellowship at the University Health Center of

Pittsburgh School of Medicine (where Dr. Thomas Starzl was the chairman)

He obtained his PhD degree in the University of Buenos Aires in 1987.

Together with his team, he performed the first adult liver transplantation, and the first pediatric liver transplantation in Argentina in 1988  and the first liver living related donor transplantation in a pediatric patient in 1991.
Eduardo de Santibañes directed the laboratory of experimental surgery at the Hospital Italiano de Buenos Aires between 1989 and 1995. He and his team still continue their work there.
He was president of the Argentine Transplantation Society between 1991 and 2000.
He created a fellowship in HPB and Liver Transplantation in 1992. Since then (25 years), he has trained 42 surgeons  from Argentina and other parts of the world.
In 2001 he founded the Argentine Chapter of the Argentine IHPBA (CA – IHPBA) together with other HPB surgeons.
He was president of the IHPBA Argentine Chapter (2002- 2003)
He was President of the Argentine Academy of Surgery (2004 – 2008).
He was President of the 2008 Argentine Congress of Surgery.
He was President of  the IHPBA 2010 World Congress.
He was President of the Argentine Surgical Association (2010)
He has been the Chairman of the HPB and Liver Transplantation Unit at the Hospital Italiano de Buenos Aires since 1987. His unit has performed more than 1500 liver transplants. The HPB unit is the most active in Latin America, performing more than 1500 procedures per year.
He is an active clinical researcher and has contributed to the literature with his numerous papers and book chapters. He has given more than 500 national and international presentations and lectures.
He became Full Professor at the University of Buenos Aires in 2002.
Since 2005 an until 2017, he became Prof. and Chairman of the Hospital Italiano General Surgical Service, (the most active Service in Latin America; in 2010 they performed 5300 surgical procedures)
He is Honorary Fellow of the American College of Surgeons, American Surgical Association, European Surgical Association, etc, and active member of other professional organizations.

Award “of Fellowship Ad Hominem” of the Royal College of Surgeons of Edinburgh. Founded in 1505, Scotland. September 3rd, 2010.

Guest of Honour, appointed by Universidad Nacional de La Plata in recognition of his contribution to teaching  and to the development of scientific knowledge.Chair of Internal Medicine “A” ,Universidad  de La Plata Medical School,La Plata, Buenos Aires , Argentina, November 12,1999.

Award of Fellowship Ad Hominem of The Royal College of Surgeons of
Edinburgh. Founded in 1505, Scotland. September 3rd,2010.

Publications
Over 350 Journal articles in local and International Journals and over  54 Book Chapters.